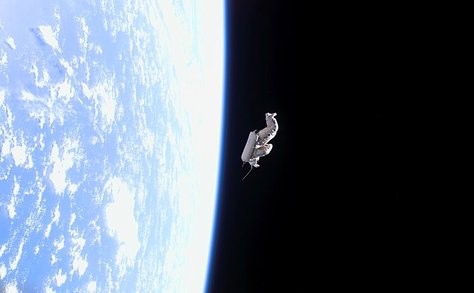 SuitSat was a retired Russian Orlan spacesuit with an amateur radio transmitter mounted on its helmet.  Voice messages recorded by the ARISS partners involved, and by students from around the globe, were continuously broadcast in a number of languages from the SuitSat, along with telemetry data.

At left, SuitSat in orbit after being deployed from the ISS in February 2006.

ARISS, or Amateur Radio on the International Space Station (ISS), was formed to design, build and operate Amateur Radio equipment in space for educational purposes.

Amateur Radio was a regular payload on Shuttle missions beginning with the STS-9 mission in November 1983, when Owen Garriott, W5LFL, carried a hand-held ham radio aboard Space Shuttle Columbia. The Shuttle Amateur Radio Experiment (SAREX) provided students with the unique opportunity to talk directly with astronauts in the Shuttle while they orbited the Earth traveling 17,000 miles per hour. With the help of Amateur Radio operators, students could attempt to contact the astronauts flying on a SAREX mission through voice, packet (computer) radio, or television, depending on which equipment configuration the Shuttle takes into space. Through voice communication students asked questions about the experiments being conducted on the mission and what it is like living in space. When the astronauts were asleep, a robot computer Amateur Radio station aboard the Shuttle made contact with hundreds of hams around the world. Students could track the Shuttle's orbit using computer software, "eavesdrop" on Shuttle communications, and listen to NASA mission commentary and bulletins about astronaut-planned transmissions.

NASA and the Russian space organization Energia have signed agreements that spell out where the physical location of the Amateur Radio equipment will be set up on the ISS. A technical team was officially established by NASA to serve as the interface to support hardware development, crew training and on-orbit operations.

In the United States, the ARRL and AMSAT provide leadership and consultation. AMSAT donates and builds hardware as well as ensuring all safety and qualification tests required by the space agencies are successfully completed so the equipment can fly. The Russians provided ports for antennas that were mounted on the station's Zvezda Service Module -- the space station unit that provides living quarters for the astronauts and cosmonauts.

The sponsoring agencies have stated that they consider access to a ham radio system a psychological support for the crews, providing them with a way to be connected and to do public outreach while they are detached in space for many weeks at a time.  In addition, Amateur Radio is a platform that allows astronauts, to quote NASA, "to offer an educational resource to students as only NASA can." Amateur Radio provides a contingency communications network for the ISS as well.

For more about the early deployment of ham radio in space and with the predecessor SAREX program, read the story as told by Frank Bauer, KA3HDO, for the 30th anniversary celebration of amateur radio on human spaceflight missions.